Heavy cars, a tight space, and a bumpy ramp right in the middle of the assembly line – that's exceptionally challenging conditions when it comes to moving cars in a plant. And with a traditional vehicle mover, it's not even possible. That gave one of the US largest car manufacturers a headache. They had serious plans to buy expensive robots or even rebuild the plant to solve the problem. Luckily they didn't have to. Stringo rolled in, released the pain, and saved millions of dollars. Here, Stringos' sales manager in the US, Jeff Barr, describes the collaboration.

One of the largest car manufacturers in the world

This car manufacturer is one the biggest in the world. The most popular car model in the US is produced here, and several other models from the same brand. The plant covers about 156 football fields and hosts 7,000 employees. It can produce some 550,000 cars each year or two cars every minute. When you look at these impressive numbers, you realize that you don't want a stop in the assembly line. It's pretty expensive, to say the least, with costs up to 20,000 US dollars per minute.

A tight, heavy, and bumpy challenge

The critical point is usually at the end-of-line, where a dead battery or just about anything can cause a car to stop. And if one car stops, the entire line has to stop. That is where the Stringo comes in. With the Stringo, the operator can safely move the vehicle to a place where the engineers can fix the problem while the line can keep on running.

In this particular case, the challenge was in the middle of the assembly line. The customer already had two Stringos 550’s working there. So far, so good. Their task was to lift the cars off the line and carry them over a bumpy ramp – in the right front wheel only – and finally put them back in another part of the line. Why only use the right wheel, you might wonder?

– In that way, the operator could put the car back in the assembly line in a much smoother way, closer to the car in front, Jeff Barr explains. 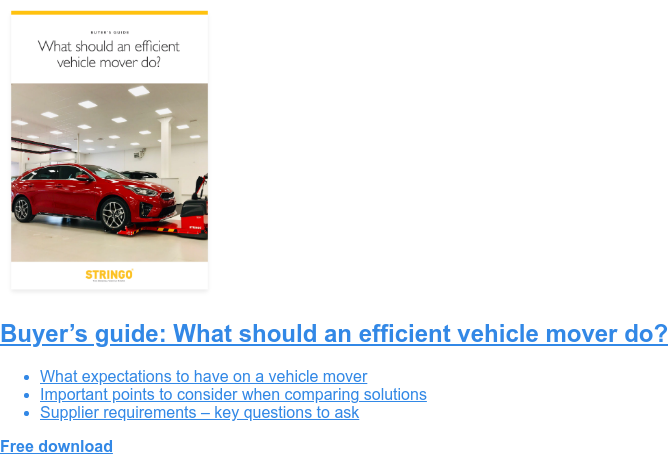 Carrying a heavy car in one wheel is very challenging because the car’s weight is concentrated on one side of the Stringos’ front section. At the same time, the pressure on the driving wheel in the back is reduced. The customer had tried to solve this problem several times but couldn't find a steady and safe solution. Instead, the Stringos’ had suffered hard from the uneven weight. The machines had spent more time in the workshop than on the assembly line. Growing maintenance costs, reduced efficiency, and severe safety risks for the operators had become a real headache for the customer. Finally, the customer realized that they needed professional assistance from the outside.

"We need to feel the customer’s pain."

– One of my favorite sayings is that we need to feel the customer's pain. And I really did. This customer had tried hard to find a solution that could work, but failed and failed over again. They had even considered buying super expensive robots or rebuilding the plant to solve the problem. So, it's fair to say that they were a bit frustrated, Jeff Barr explains.

Read more about 5 ways a car production engineer can use a vehicle mover.

The solution: a customized Stringo 550+

A series of visits to the plant followed. Jeff and Stringos’ technical manager, Magnus Grafström, talked to the line operators and managers in the plant. He went back to Sweden to brief his team, and they started working immediately. Eventually, the engineers at Stringo headquarters came up with a solution that looked promising. The idea was to update and customize a Stringo 550+ – the most robust and powerful model from Stringo, initially developed especially for the American market.

The Stringo 550+ has all the advantages of a regular Stringo, plus next-level features. For example, the upgraded front section has lower gravity enabling outstanding stability. It's also equipped with boogie wheels that allow you to drive smoothly over obstacles while the operator stays in total control. And thanks to the robust design, frequent usage has a low impact on maintenance and repair. In addition to all these advantages, the team in Sweden did several unique updates and adjustments to meet this customer's particular needs.

To further strengthen the stability, a new support wheel was added to the right-hand press arm on the front section. Then, the existing support wheels under the drive unit were moved out on the sides, with a new customized attachment. Also, a pair of small guiding rubber blocks were added to both the front and drive units, helping the operator position the car on the Stringo with maximum precision. It might seem like minor adjustments, but it required total commitment and an eye for details to solve the problem.

The Stringo keeps on rolling

Magnus Grafström and his team spent many hours calculating the new and modified features to find the perfect balance and stability. But he's convinced that it was the visits to the plant that made all the difference.

– We couldn't possibly have solved this problem without spending time in the factory. You must talk to the operators and investigate challenges on site to find out what to do. There's just no other way.

The customized Stringo 550+ was a perfect solution for this challenge. And the customer is already planning to roll it out to more facilities in the US. Jeff Barr is more than pleased with the collaboration and how everything worked out.

– The customer is very happy with their new vehicle movers. They didn't have to buy super expensive robots to move the cars, and they didn't have to rebuild the plant, which would have cost them millions of dollars. Now they can move their vehicles safely, smoothly, and efficiently to a fraction of that cost.

– We simply released this customer's pain by listening very carefully to what they had to say. It's where it all starts. It doesn't have to be much more complicated than that.

What challenges are you facing?

Please, contact us, and we will help you out.

Comitted to the mission: 32 years in the company

5 ways a car production engineer can use a vehicle mover

Tale of a Clay Modeller

The new role of car dealers in a changing automotive landscape

Tale of a Clay Modeller